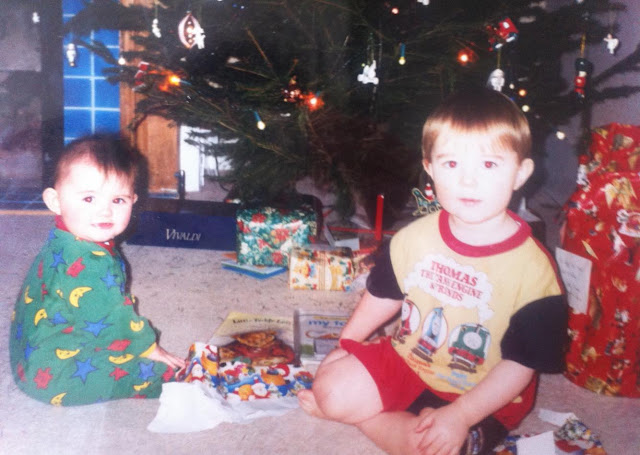 Growing up, no two Christmases were the same. I had friends who did the same routine each year, but my family weren't like that. Somebody different hosted every year, and we had a lot of hosts to negotiate, as due to step-family, my brother and I had three sets of grandparents.

Our little unit of four however, my parents, brother and I, did have one of two little traditions that we would repeat each year. For example, when we were really small, "Father Christmas" would bring our  "main" presents to us while we were asleep and leave them in a sack (actually just an old pillowcase) at the bottom of our beds. Then in the morning, we would open these presents in my parents' room rather than around the tree. My dad always used to have reporters notebooks on hand, and he would spend the present frenzy writing down who gave us what so that we could thank them later on! Although we didn't have many big traditions that were honoured each year, I have a couple of very memorable Christmases from my childhood...

One year, when I must have been about 10, we had my cousins round in the evening on Christmas Day. I adored my cousins and really felt like we grew up together, so it was very exciting to see them on the big day itself, as that didn't always happen. I remember playing card games around the table in the front room and listening to jolly music. Then, it started to snow! Not just a little sprinkling... proper heavy snow that settled immediately and became a perfect powdery sheet of white within half an hour. We spent hours outside, having snowball fights, building forts, and just soaking in the magic of a white Christmas. Boxing Day was equally as fun. We all went to our local park and spent the whole day sledging. I can remember thinking that the snow was so deep... maybe if I saw it now it wouldn't seem quite as deep to me... but in my memory, we were in a winter wonderland.

Talking of winter wonderlands, I suppose it would only be fair to mention the Christmas we spent in a log cabin when I was 12. I had some family who lived in Snowdonia at the time, and my parents must have thought it would be a nice change to spend Christmas with them. I don't remember being disappointed about being away from home - my biggest worry was that we were going to be up a bloody mountain and by huge steep sheer drops... this didn't appeal to me so much. Luckily, in reality we weren't really up a mountain, it just felt very hilly. And there were no precipices - thank goodness!

The log cabin wasn't exactly as magical as we thought it was going to be. It was freezing for a start - it felt a bit like staying in someone's shed... in the depths of winter. The shower was a sorry little trickle and my brother and I had to sleep in tiny bunk beds. However, the Christmas was saved by the two dogs that my family had back then - Topsy and Bertie. Topsy was an elderly Great Dane, and was most happy leaning against someone's legs in front of the fire... or trying her hardest to sit on your lap! But Bertie was young and playful... we spent hours roaming the national bark, with Bertie leading the way. He didn't lead the way however when we had to get over a stile. Bertie point-blank refused to climb over the steps himself, meaning my dad had to carry him over. But on the way back, Bertie bounded ahead and jumped over the stile no problem! That was typical Bertie... so cheeky and full of character. He made that Christmas.

These days, our Christmases tend to be quieter. My brother and I have both moved away from my parents, so we all look forward to being together again in the family home. My dad's birthday is actually on Christmas Day, and in recent years we've had a little party on Christmas Eve... which is always a blast. I'm glad my childhood Christmases were varied, it was exciting and I suppose some might even say it was "character-building". But in all honesty, I'm happy to be spending this Christmas in my childhood home with my parents, brother and boyfriend,  rather than in a shed... sorry, log cabin!